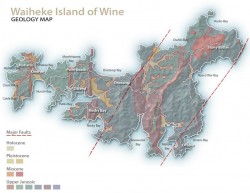 The rock that underlies a vineyard is a major factor, if not the major factor in determining varietal variations in different terroirs.

With several significant exceptions, most of the islands’ vineyards are separated only by thin layers of soil and clay from massive sequences of Jurassic strata that range from 145 to 158 million years in age.

Elevation of the early landform above sea level, and erosion for millions of years, has resulted in vines flourishing where dinosaurs and ammonites once ruled!

The island rock on which we now walk is almost entirely of Jurassic age and our wines derived from these sediments are truly distillations of millions of years of earth’s history.

Though Waiheke is small in area, the age and chemical constitution of the base rock under our vineyards can change markedly and abruptly, even in very small distances.

The multi-faceted hills created by the early upheaval of the land lead to further variation in vineyard aspect vis-à-vis sunlight and wind which, together with rainfall, have a strong influence on the choice of grape variety.

An examination of the geological map of Waiheke Island reveals that the rock strata has been enormously compressed and fractured by tectonic activity causing the landscape to be massively deformed by a series of compression folds whose axes run more or less North and South. Plotting the location of vineyards relative to these formations and their resulting mineral sediments and deposits will reward the wine connoisseur in search of unique varietal expression.