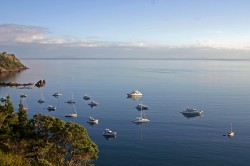 Waiheke Island’s climate is strongly influenced by the surrounding sea

Waiheke Island’s climate is strongly influenced by the surrounding sea.  Being situated in the Hauraki Gulf to the east of Auckland, the island is partially protected from the prevailing colder/wetter west and southwest winds, making it both drier and warmer than the Auckland isthmus.

However, with an area of just 92 square kilometres and a coastline of 133.5 kilometres, it is the proximity of the surrounding ocean that has most bearing on the climate from a viticultural standpoint.

The ocean acts as both a fan and an insulator. Sea breezes moderate rising temperatures in mid-summer. The ocean moderates falling temperatures at night. In simple terms, this means that mean temperatures during the growing season are comparable to much ‘hotter’ regions but without the extremes and, critically, these moderate temperatures extend longer into the early autumn ripening period of March and April, allowing later varieties to ripen fully over an extended period.

This maritime influence is so marked that comparisons with other premium winegrowing regions only serve to highlight the unique differences between each. Coonawarra in South Australia, for instance, shares the same latitude but enjoys higher maximum temperatures and lower mean temperatures.

Hermitage in the Northern Rhone, the home of Syrah, has very comparable average temperatures and rainfall patterns but its winds are continental rather than maritime and temperatures drop more quickly as the season ends.

The more the differences are exposed through comparison, the more evident it is that climate is a key element in the unique terroir that defines the great winegrowing regions and makes each one of them so appealing in their own way.

Waiheke can grow and ripen a wider range of grape varieties than other regions because of its long, mild season and the significant variations in vineyard site orientation and soil structure. Historically, the wet season begins in April, potentially threatening late varieties such as Cabernet.

However, the standard deviation for rainfall during any particular month is high with rain tending to fall in short-duration deluges. In these circumstances, rapid run-off on sloping sites with hard topsoil becomes advantageous.